Price is in US Dollars.

This product is a downloadable ZIP file (approximately 70MB).

A campaign for characters of Levels 1-5 for the world’s greatest roleplaying game. Fifth edition compatible.

“I would highly recommend this title.” Ellen M

“What a great fun romp this was. Some really terrific opportunities for roleplay and blazing battles t’boot. Well worth a look.” Rhiver C

“Would recommend for a good fun campaign.” Brenton H.

“A great, engaging and fun story that has all sorts of hidden twists. I would recommend this to any lover of dnd.” River S.

A guerilla war, a mystery, pursuit, puzzles and challenging encounters – the battle for Hilt Island has it all!

After forty years of peace, the Edrassan Kingdom has invaded the Temple Empire. Hilt Island is the strategic key to the war, and the Edrassans have besieged both the capital Chronlan and the island’s Ember diamond mines. The Templites must buy time for reinforcements to arrive.

The Temple Empire recruits the party to raid and disrupt the Edrassan war effort. Disguised as the Black Hand, they must attack the Edrassan rear areas, forcing the enemy to divert troops from the front lines to hunt them down. If ordinary Edrassan soldiers fail to catch or kill them, the party will find themselves facing Captain Thurn, the Butcher of Wolflow, or even the infamous Agent Stretch of the Edrassan secret police.

Between raids and deadly encounters, the party will have many exciting adventures, including uncovering how the Edrassans knew so much about  Hilt Island’s defences. Could they have received help from inside the Templite government?

Once sufficient damage has been caused, the party will receive new orders to rescue the alchemist Efflam Striker, who is vital to the war effort. They must escort him to Chronlan, which is still under siege by the Edrassans, and the party will have to find a way through the siege lines in order to smuggle Striker into the city.

By completing many vital quests, the party will help turn the tide of the war. A chance to end the conflict comes when the party identifies the Templite government traitor. They must lead a force to the traitor’s mountain retreat, break-in and defeat this powerful mage to save Hilt Island from the Edrassan invaders.

The party may travel anywhere on the island, visiting locations in any order they wish. Unlike many sandbox adventures, Black Hand Rising includes detailed guidance for the Game Master to make the adventure easy to run and enjoyable for everyone. Includes comprehensive cross-referencing.

– Three short stories you can share with your players to increase immersion. One story as background before the campaign begins and two for sharing after they meet key NPCs.

Praise for Beastmaster’s Daughter (which is included in Black Hand Rising):
“… one of the most fun monster hunting adventures in D&D 5e I’ve ever played … a unique, engaging, and well-balanced module … everything you could possibly want.” Dungeon Solvers 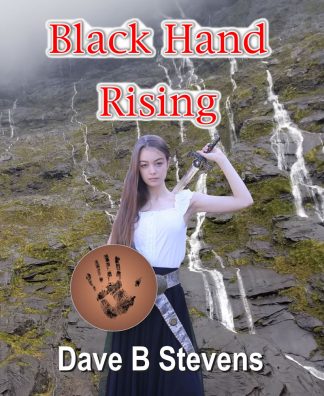